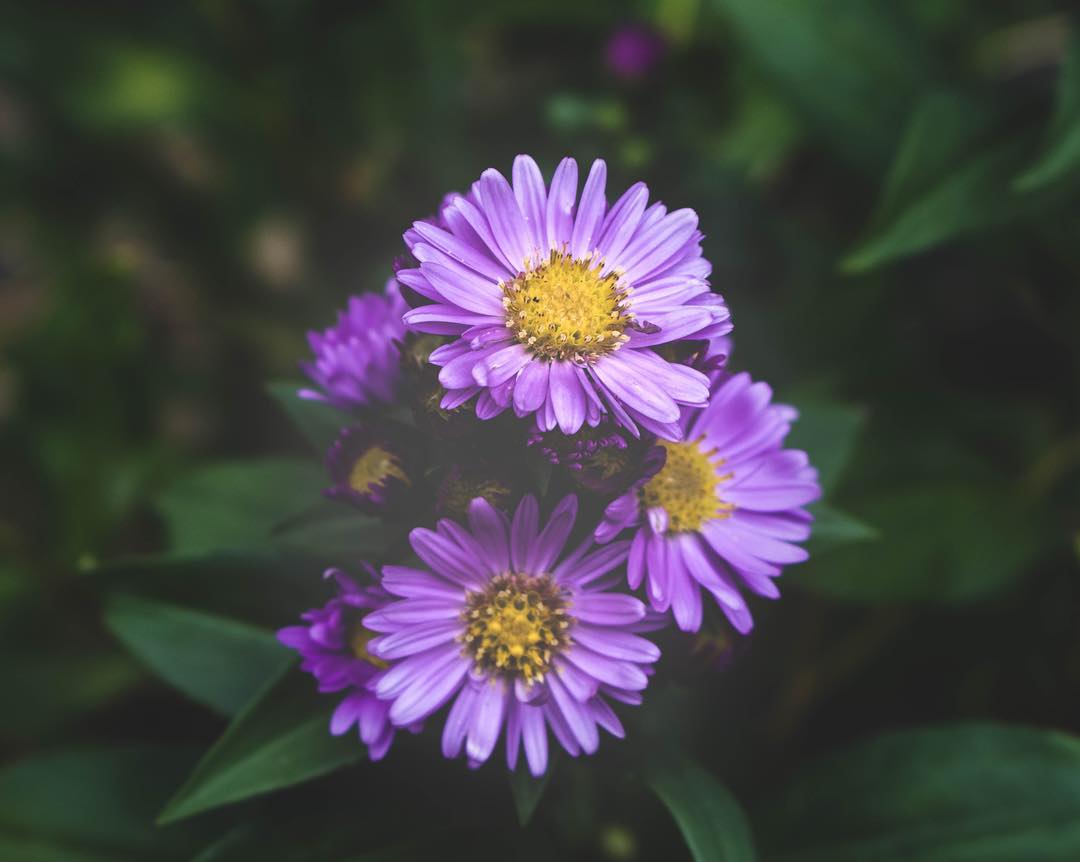 Aster is a botanical genus in the Asteraceae family. It looks like a small blue star. There are almost 180 species of this flower among which we can find many varieties. Some are spiky, some are bigger than others, and there are different colors. Aster is native to Eurasia and its origins date back more than 4,000 years. In this article, we are going to cover the aster flower meaning as well as interesting stories and legends about it.

Asters are very old flowers which humans have been cultivating for more than 4,000 years. They are among the first flowers that people started to cultivate in gardens. But naturally, they grow in the fields and are in the same family as daisies. Their botanical name “aster” comes from the ancient Greek which means ‘a star’. We can tell this makes sense by looking at the shape of it. Asters were sacred flowers of Greek and Roman gods. Ancient Romans and Greeks used to decorate their altars with this flower. As you may guess, there is no exact aster flower meaning. But in the language of flowers, asters symbolize love, loyalty, wisdom, light, and power. In China, asters are the symbol of faithfulness.

One of the main aster flower meanings hides in its shape. Throughout the history of mankind, people always send their hopes, wishes, and dreams to the stars. Thus, aster flower as a gift expresses a wish or a dream. But you must never tell your wish to anyone. Because people believe that it will never come true.

Aster is the flower of a 20th wedding anniversary also known as the platinum wedding. In the modern flower language, Aster means love and patience. It is a flower of those who born in September, so it is a perfect gift for a birthday.

The Teutons believed that the smell of burning a dried aster leaves scares off poisonous snakes and evil spirits before winter. So, another aster flower meaning is protection. During WWII, people placed asters on the tombs of French soldiers to honor them. With this in mind, this flower may also symbolize respect to the dead people.

In the flower language, aster symbolizes fidelity in love. Usually, the number of flowers in a bouquet indicates the extent of your commitment. The meanings slightly differ according to the color of aster.

As we have mentioned before, the name of aster comes from ancient Greek and means ‘star.’ According to the Greek myth, aster flowers born in the tears of the Greek goddess of justice Astrea. She started crying when Pandora opened the box with all the evils of humans. Meanwhile, ancient Romans have made aster the icon flower of the goddess of love Venus. According to the Roman poet Virgil, Romans often decorated the altars with asters.

The Christian tradition also proposes a version of aster’s birth. According to the legend, asters appeared when the Virgin Mary was looking at the earth from heaven started to cry. Due to the fact that asters bloom in autumn, another meaning of this flower is related to the end of the cycle or death.

Another interesting fact about the aster flower is that it is called the same way in many other languages. Including Swedish, French, English, Dutch and, Spanish.

The Cherokee legend of aster flower

There is another legend about aster flower which belongs to the people of Cherokee tribe. The legend says, that once there were two tribe warriors that were fighting a war over a hunting-ground. During the conflict, they came to a village and killed all the people in it. But there were two young sisters that went to the nearby woods before the killing started. The girls avoided death.

They were scarred and horrified. The girls knew that the men will be coming back for them. So they ran to the nearby mountain to search the Lady of Herbs. People believed that she had received the gift from the gods. She was making magical potions from various plants that grew in that area.

When they reached the place where the lady lived, the two sisters were very tired and fell asleep on the grass. As they were sleeping, the Lady of Herbs came and began to look into the future. She saw that the men were looking for the sisters. The Lady of Herbs then watered the sleeping girls with one of her magic potions and covered them with leaves. The next morning young sisters transformed into two beautiful flowers growing in the same spot they fell asleep. One of the flowers looked like a small blue star – it was the aster flower. The other sister was the golden stick

Things you should know before you plant aster in your garden

This flower isn’t very demanding in terms of climate and adapts to all of them quite easily. Asters usually appear at the end of the summer and can persist during most of the winter. There is, however, a species that bloom in spring, but they are not that resistant as autumnal asters.

What asters do need is a lot of sunlight. But make sure the sunlight reaches them in the morning or evening when the heat is not highest. You should plant asters in a place which stays in a shadow during daylight hours. One of their most special characteristics is that when the weather is very cold, the part of the aster that is left on the ground disappears. But its roots remain alive and at the moment when temperatures rise, they re-sprout.