Cosmos – the flower of October. What does this plant symbolize? 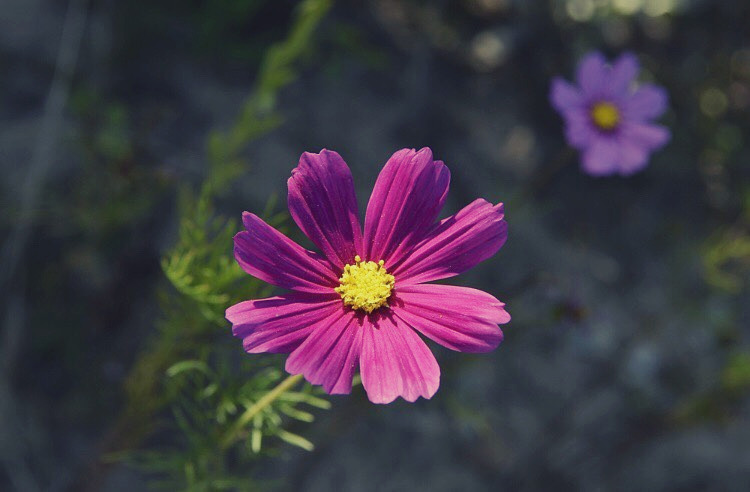 Did you know that cosmos flowers are one of the easiest ones to grow? You can literally plant them anywhere and you’ll probably have them blooming in no time. If you like these flowers, stay with us for a while. We are going to talk about the cosmos flower meaning, origins, history, and other interesting facts.

Cosmos is native to Mexico, where most of its 20 species grow. But it also occurs in the U.S, and South Africa where it was imported from Argentina.

During the 16th century, large quantities of cosmos flowers were brought back to Spain from Mexico by Spanish explorers. Then, the collected cosmos seeds were brought to England by an English ambassador’s wife in 1789.  Finally, in the mid-1800s, cosmos flower was introduced to the gardens of the U.S.

Spanish priests planted cosmos flowers in gardens during their missions. Apparently, they were so impressed by the flower’s evenly placed petals, that they gave it a name ‘Cosmos’. It is a Greek word meaning ‘order and harmony of the universe’.

The most important cosmos flower meaning comes from its name. The Greek word ‘kosmos’ represents the world and order. Greeks believed that the world was in perfect harmony. So, the Spanish explorers who gave this flower the name of cosmos should have been very fascinated by its harmonious petals. Cosmos flower represents harmony and order. They also symbolize peace and tranquility.

In the language of flowers, cosmos is the symbol of love and innocence. Other cosmos flower meanings include beauty, balance, modesty, joy.

Some people believe that the cosmos flower is associated with the throat chakra. They believe that it helps those who have difficulty expressing thoughts or have a fear of public speaking. This image is related to the ‘bringing the order to chaos’ concept, which comes from the name of the cosmos flower.

The characteristics of cosmos

Cosmos flowers belong to the Compositae genus which has 20 known species. All of these species are the members of the Asteraceae family, including aster, sunflower, and daisy. The most popular species are Cosmos Sulphureus (blooms in yellow, red, and orange shades) and Cosmos Bipinatus (blooms in white or pink shades). As already mentioned, cosmos flowers are native to Mexico but are spread all over the U.S. and Europe. Cosmos flowers bloom from summer to fall and come in many different colors: yellow, orange, pink, red, white, cherry and others.

Cosmos flowers grow easily in warm climates. They tolerate almost any soil and doesn’t even need much watering. Although the blossoms will grow bigger if you will water them regularly. Cosmos flower won’t be a superstar of your garden, but it will definitely highlight the beauty of your other flowers and will make beautiful harmony.

Cosmos are the flowers of warmth and are very vulnerable to cold. So, make sure you plant them in mid-June at the earliest. But the good news is that they grow pretty fast. It takes about 70-80 days for them to fully mature. Another thing worth mentioning, is that cosmos flowers grow faster when you cut them off regularly.

Although we know cosmos flower mostly as an ornamental plant, turns out it has a long traditional use in Brazil for treatment of malaria. Cosmos contains butein which has antioxidant and anti-inflammatory properties.

Cosmos flower used to be one of the main sources of yellow dyes in Central and South America until the Columbian era. This flower also contains quercetin which has antiviral properties. You can use it to treat sore muscles and skin problems

Cosmos caudatus commonly known as the king’s salad has bioactive compounds such as ascorbic and chlorogenic acids. Researchers have found that  Cosmos Caudatus also has many medicinal properties. It has anti-diabetic activity, anti-inflammatory response, it protects bones, and has anti-microbial properties as well. Studies have shown that all of these properties worked well on animals and didn’t have any negative effects.

In the past, people used the king’s salad to boost blood circulation, strengthen their bones, treat various infections, and reduce body temperature. Also, it was used as an anti-aging remedy. We can also find the king’s salad in many Indonesian and Malay cuisines. People use their leaves mainly for salads.

Other facts about cosmos